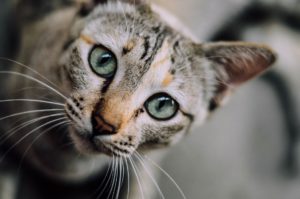 With summer swiftly approaching, and with it, an increase in mosquitos, Dr. Guilherme Verocai, a clinical assistant professor in the Department of Veterinary Pathobiology and director of the Parasitology Diagnostic Laboratory at the Texas A&M College of Veterinary Medicine & Biomedical Sciences, has advice for combatting the most common mosquito-borne diseases, including heartworms, the most significant parasite of dogs in the U.S.

Heartworms are most frequently found in dogs, but they can also infect cats, ferrets, and even wild canids like coyotes.

“Adult worms live in the heart and pulmonary arteries,” Verocai said. “The larval worms, also known as microfilariae, are found in the bloodstream and are picked up by mosquitoes during a blood meal. The larvae will develop inside the mosquito and pass to another dog during a subsequent blood meal.”

The symptoms of heartworms include coughing and abnormal lung sounds, followed by heart, lung, liver, or kidney damage.

Verocai said early treatment is vital for heartworms, but the best option is to use preventative medications to stop infection before it occurs.

The American Heartworm Society recommends testing annually for heartworm antigens and microfilariae in addition to keeping pets on preventative products all 12 months of the year. These products kill heartworm larvae once they enter the pet’s body and may also work against gastrointestinal worms, fleas, ticks, and mites.

Verocai said topical products can be used as an additional measure to repel mosquitos, but these products only reduce the animal’s chance of getting heartworms rather than eliminate the risk altogether.

“There are several topical products for dogs that contain repellents and insecticide drugs that have label claims against mosquitoes and are effective for up to a month,” he said. “There are no labelled products to control mosquitos in cats that are effective for an entire month, but there are over-the-counter products that have repellency activity for shorter periods of time.”

Besides spreading heartworms to pets, mosquitos can also transmit several viruses to other animal species and people, such as malaria, yellow fever, dengue, and Zika virus.

Various forms of encephalitis can also be spread to horses through mosquito bites, but vaccines are usually able to prevent infection. For horses, cows, and members of the deer family, mosquitos can transmit roundworms that live in the host’s body but rarely cause disease.

Despite the many possibilities for harm, mosquito bites are usually no more than a nuisance to pets if preventative medicine is used year-round. For dogs and cats, these medications often help kill fleas and ticks as well, making it easy to prevent all three pests at once.

Pet Talk is a service of the College of Veterinary Medicine & Biomedical Sciences, Texas A&M University. Stories can be found at vetmed.tamu.edu/pet-talk. Suggestions for future topics may be directed to  editor@cvm.tamu.edu.

Like Pet Talk? Here’s another on Managing Feline Acne.